The Gin and Seed House

Once a key agricultural industry location because access to the Flint River and available electricity, Sulphur Springs or “Hump” as it is now called was home to one of Alabama’s first Cotton Gins.  Supported by the water generated power made available by “Quick’s Mill” which was located across the street, the original Spelce Gin (located at “1910” Walker Lane) started by the Spelce family was a two story all wood structure.   It sat where the large 1920’s vintage diesel engine that once powered it still remains today. The exact date of construction for the original Gin is unknown at this point but believed to be in the late 1800’s.   The General Store was also believed to be built around the same time to support the farming community.

Sometime in the early 1940’s the all metal Continental Ginning Company Gin you see today was constructed to meet the huge demand of a booming cotton industry.  The “Seed House” was the central storage building for the cotton seeds that were extracted during the ginning process and was used to house the excess 500lb cotton bales.

Claude Tipton, a “Ginner” (or the man that ran the Gin… sometimes around the clock during peak season) was said to be seen routinely moving these 500lbs bales unassisted to make room as needed…or just to prove he could when requested. As another interesting side note, his father, Albert Tipton, was a carpenter that helped build the Seed House and his name is written in the concrete around the property. These were the current owner’s Grandfather and Great Grandfather on his Mother’s side.
​
The Spelce Gin was later sold and renamed Delap & Gray Gin and continued its successful operation into the 1970’s. It was then replaced by the one that is still active just down the road. During the 1970’s and 1980’s the Gin became the new headquarters for Taylor Brothers Farms. The current owner’s family on his Father’s side.

The three Taylor brothers (Bob, Bill, and Tom… along with their families) who began farming from their original family home on the adjoining Jacks/Taylor Farm, had three business lines. They were row crop and cattle farming, a feed and seed store, and a trucking company.  In the early 1980’s the Seed House was converted into a home by Bill Taylor where he raised his family.  It was later sold to M.G. Mann who kept the farm until it was purchased back in 2016 and restored by Jeff and Cori Taylor and renamed the 1910 Gin. 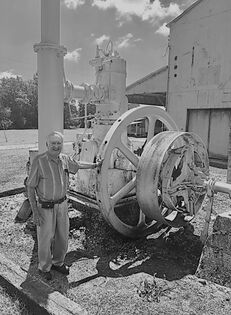 ​This large and now very rare diesel engine was designed/built in the early 1920’s and was used to power the original Cotton Gin. Less than half a dozen are known to still be in existence.

Nearly 15,000lbs of steel holds a 2,700lb flywheel rigid during the operation of its two cycle, 14” bore by 17” stroke engine. It repeatedly moved a 750lb single piston and connecting rod, achieving a constant operating speed of 257 RPMs. A small engine was used to provide 200lbs of compressed air to start the large engine when accompanied by a cotton wick and fuel.

The air tanks and small engine were located near the concrete cooling tower.  A cooling screen was used to help dissipate the water temperature as it entered the 900 gallon cooling tower.  The water continuously circulated throughout the engine, cooling it while the engine’s rotary power drove a flat belt to a pump that circulated the water.

The Y-VA engine was the first commercial version of a high-compression, cold start, full diesel developed by Fairbanks-Morse without the acquisition of any foreign patent. 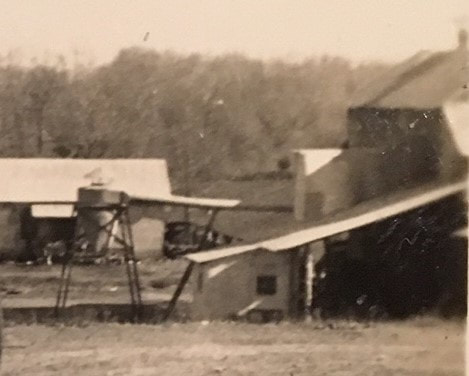